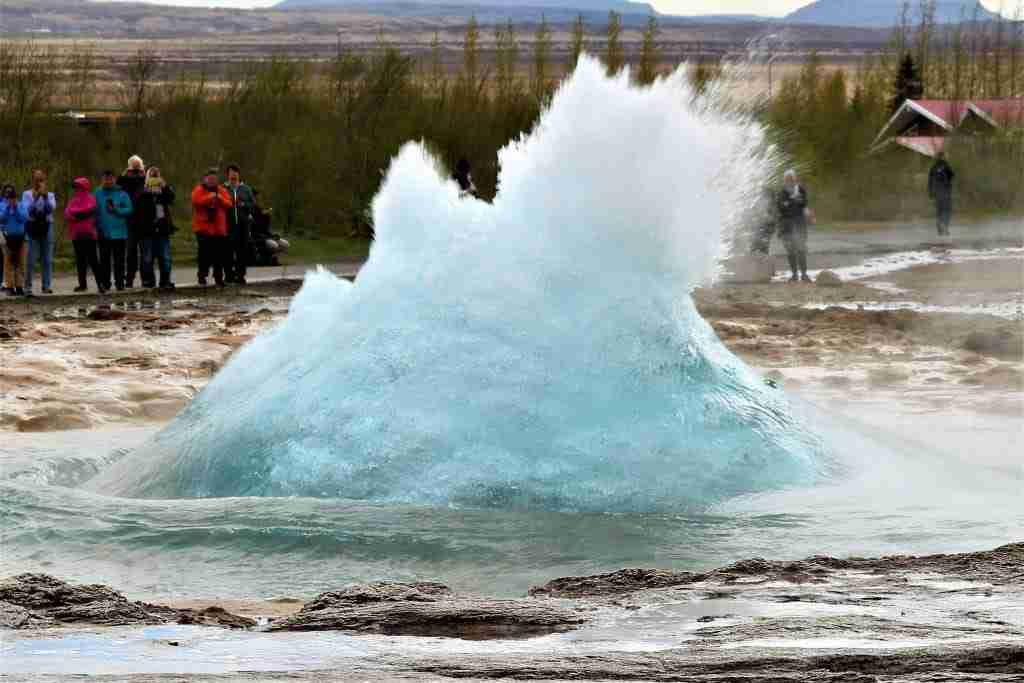 This famous tourist route has been popular among locals and visitors alike since the beginning of tourism in Iceland (to dramatic?). The name refers to the route from Reykjavík to Þingvellir National Park, Geysir geothermal area, and Gullfoss waterfall. These three places are without a doubt the most iconic attractions in Iceland! They are not only geological wonders but also have tremendous cultural and historical importance.

In addition to these “giants” there are other lesser known attractions and places worth stopping at all along the Golden circle. These places include the lesser known Faxi waterfall, a semi hidden gem just a small detour off the famous route. Then you have the Kerið crater, an extremely picturesque volcanic crater, with its vivid color contrasts and pristine lake.

If you ever find yourself travelling along the Golden circle, a stop at Efstidalur farm for some fresh, locally made ice cream is a must! Unless you are lactose intolerant than you might want to opt for the coffee and cake, after all you will be spending the day in the car so unexpected bathroom breaks can be difficult to fit into the schedule. Last but not least a visit to the Secret Lagoon in Flúðir is highly recommended. There you can get some much needed R&R after a days worth of road tripping. This old pool is as original as they get and offers a great experience.

Keep reading and learn more about the iconic attractions of the Golden circle in Iceland!

Þingvellir (or Thingvellir) is a UNESCO world heritage site. It’s not only the most historical place in Iceland, it’s also a geological wonder! For those who are travelling the Golden circle in a clockwise direction, Þingvellir will be your first stop.

The birth of a nation

Þingvellir was the setting where our first national parliament was founded, and the first parliament in the world I might add. Founded in the year 930 and convened there until 1798! Ruling chiefs used to travel there from all over Iceland. At first discuss law and to create a commonwealth and later to settle disputes, share news, and trial and punish criminals.

Although this location was very optimal for the wealthy chiefs of the South-West region, it took other chiefs up to 17 days to get there. Participation was pivotal as decisions were made collectively to ensure bipartisan outcomes. Although the parliament of Iceland has been moved to Reykjavík it is the longest running parliament in the world!

From a geological stand point it is also very interesting as it’s one of the best places in the world to witness the continental drift. Þingvellir is located on the North America and Eurasia tectonic plate boundaries of the Mid-Atlantic Ridge, so you can literally witness the two plates drifting apart forming the enormous rift valley. You can even snorkel or dive between the two continents, a very unique experience!

The English word geyser is actually drawn from the Icelandic Geysir, spouting hot spring. Although Geysir hasn’t been active for some years now, the Strokkur hot spring has been entertaining guests ever since, spouting boiling hot water up to 40 meters in the air every 5-10 minutes. It really is a stunning display of the powers that dwell underground here in Iceland. The area is full of boiling mud pits and fumaroles which all add to the overall experience of visiting it.

Where is the Geysir geothermal area?

The Geysir geothermal area is located in the Haukadalur valley and is usually regarded as the second stop on the Golden circle route. The area has been inhabited since early settlement in Iceland due to the abundance of geothermal energy. It has also served as a popular travel destination, among locals and visitors, throughout the years.

Gullfoss, or golden waterfall, is an impressive two-tier waterfall in the glacial river Hvítá which originates in Langjökull, Iceland’s second biggest glacier. The greyish-brown glacial water cascades with a thunderous roar down 32 meters into the canyon below. The immense power of the river has carved the land and the canyon walls now reach about 70 meters in height!

But Gullfoss is more than just a beautiful waterfall.

Gullfoss represents a triumph in environmental protection. In the early 20th century foreign investors wanted to produce electricity by harnessing the immense power of Gullfoss. One brave woman stood in their way and wouldn’t relinquish the land over to the investors and after years of tiresome litigation her efforts prevailed. Her struggles to preserve the waterfall brought attention to environmental protection and she arose as the first environmentalist in Iceland.

At Gullfoss you’ll find a restaurant and a souvenir shop. It is also the starting point for various glacier adventures to Langjökull glacier, Iceland’s second biggest glacier. If you haven’t been on a glacier I recommend taking the opportunity if you are in the area. Trust me there is nothing quite like racing across a glacier on a snowmobile on a nice summer day.

Want to take a self drive road trip around the Golden circle? The Golden circle is a part of all our road trip itineraries in Iceland. Peruse our various tour options and get in contact with us here.

Save & Accept
Powered by CookieYes